Jesús Toalá Will Be Awarded the Marcos Moshinsky Research Professorship 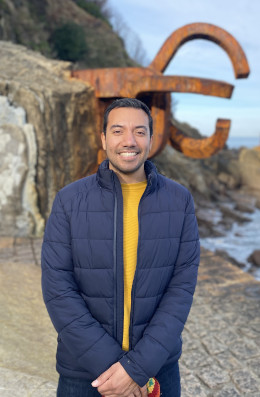 Dr. Jesús Alberto Toalá Sanz from the Institute for Radioastronomy and Astrophysics (IRyA) at UNAM Campus Morelia, Mexico, will receive the Marcos Moshinsky Professorship that is annually awarded by UNAM’s Physics Institute to young researchers in the areas of Physics, Mathematics, Chemistry and Biology, to develop a research project in their interest areas.

“I received an email from the Physics Institute asking me for a phone number, and at first I didn’t get what was it about”, Dr. Jesús Toalá told us in between laughs, without hiding his joy. “Later I received a phone call from Dr. Ana Cecilia Noguez Garrido, director of the Physics Institute, to notify me that I had been awarded a Marcos Moshinsky Professorship, and she told me the Physics Institute hoped that this recognition would motivate my scientific career”, Dr. Toalá continued.

Researchers selected for this Professorship must have proven accomplishments, and at the same time ample growth potential in their area. This is the case of Dr. Toalá, who in a short amount of time has managed to consolidate and lead the Evolved Stars working group at our Institute, which includes senior and junior researchers, postdoctoral fellows and several Master’s and PhD students.

The project submitted by Dr. Toalá to be awarded the Marcos Moshinsky Professorship is called “Unveiling the extended X-ray emission in nova remnants”, in which he and his colleagues will study the regions around binary star systems in which a nova explosion occurred. It will last two years, and may include postgraduate students both at IRyA and at other institutions in Mexico, which shows that Dr. Toalá and his collaborators are leaders on this subject both nationally and internationally.

Upon questioning Dr. Toalá about the social value of Science, he mentioned that “astronomy might not have an immediate social impact, but it requires the development of Physics, Mathematics and technological tools, so supporting and funding basic Science projects in Mexico brings long-term benefits. I believe that astronomy, besides that impact, is also a branch of Science that attracts a lot of attention and encourages people to make questions. I like bringing astronomy to people a lot, so to generate knowledge and transmit it to people later is another way to have an impact on society”.

Dr. Toalá has two collaborators who have received the Marcos Moshinsky Professorship before: Dra. Laurence Sabin, from the Institute of Astronomy at UNAM, Mexico, and Dr. Gerardo Ramos Larios, from the Institute of Astronomy and Meteorology at the University of Guadalajara, Mexico. “Laurence and Gerardo are two fo my closest collaborators in Mexico, so it is very nice to know that the three of us have received this distinction”, commented Dr. Toalá.

Novas have been known for centuries, and are called that way because they can be observed with small telescopes or are even visible to the naked eye as “new” stars. In reality they are explosions in binary star systems where one of the components is a white dwarf, which captures material from its companion star, forming a superficial layer of hydrogen.

When it reaches a critical mass there is an explosion, the nova itself, that ejects the outer layers at hundreds or thousands of kilometers per second and can increase the system’s brightness thousands of times. Some time afterwards, the system stabilizes and the process of matter accumulation onto the white dwarf resumes. The ejected material forms a “shell” that can be observed with space and ground telescopes.

Dr. Jesús Toalá obtained his Bachelor in Physics degree from the Autonomous University of Sinaloa, Mexico, and his PhD in astrophysics at the Instituto de Astrofísica de Andalucía (IAA-CSIC) in Granada, Spain. He was a postdoctoral researcher at the IAA-CSIC and at the Institute of Astronomy & Astrophysics, Academia Sinica (ASIAA) in Taiwan. He is a researcher at IRyA UNAM, Mexico since June 2017.

He studies the circumstellar medium around low and high-mass stars through infrared, optical and X-ray observations. He also studies the X-ray emission from superbubbles in the Large Magellanic Cloud.

Dr. Toalá also organizes the meetings of the Evolved Stars working group at IRyA, and is a member of the editorial board of the UNAM Campus Morelia Bulletin.