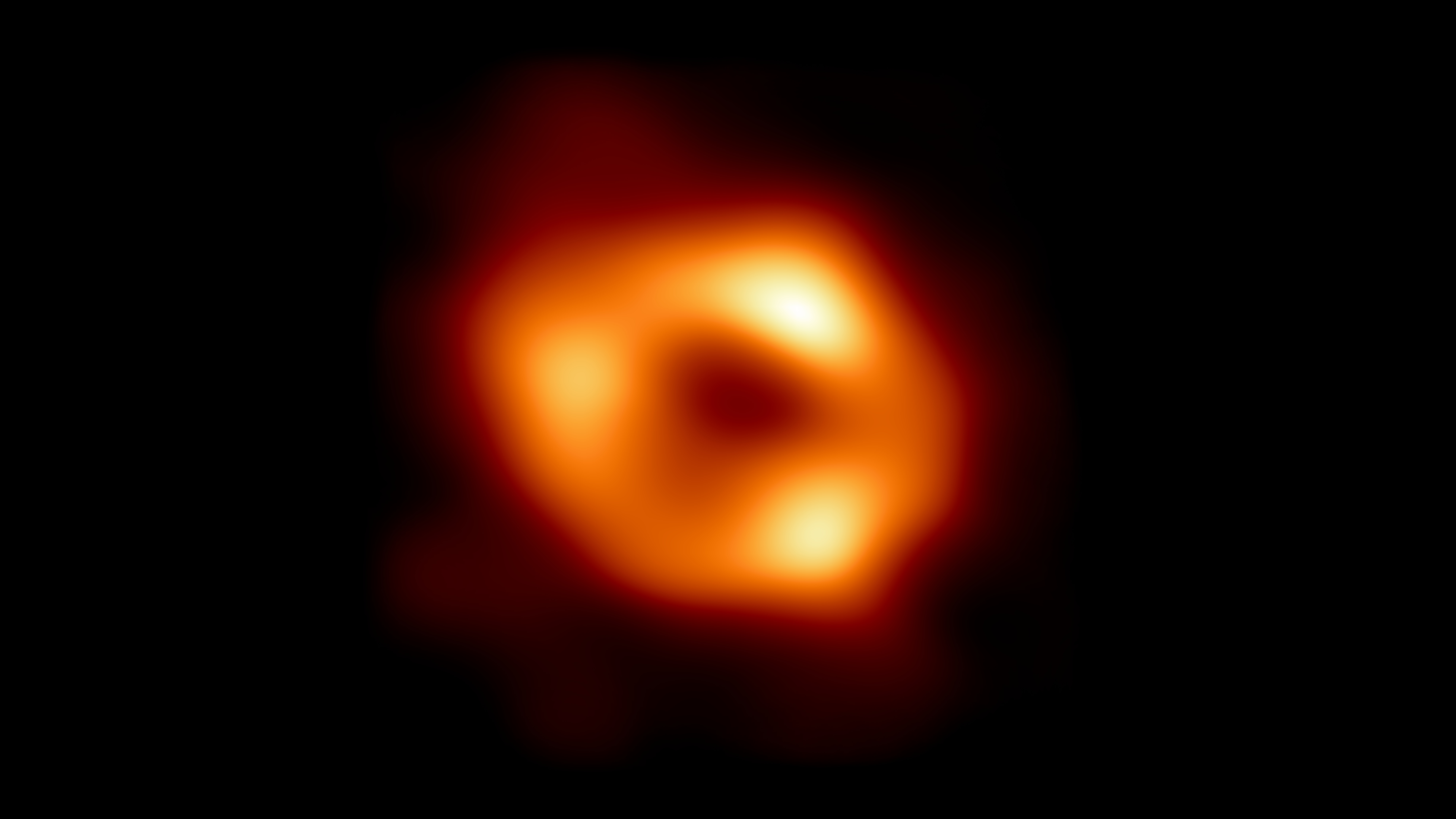 At simultaneous press conferences around the world, including at Mexico’s Consejo Nacional de Ciencia y Tecnología (CONACyT), astronomers have unveiled the first image of the supermassive black hole at the centre of our own Milky Way galaxy. This result provides overwhelming evidence that the object is indeed a black hole and yields valuable clues about the workings of such giants, which are thought to reside at the centre of most galaxies. The image was produced by a global research team called the Event Horizon Telescope (EHT) Collaboration, using observations from a worldwide network of radio telescopes.

The image is a long-anticipated look at the massive object that sits at the very centre of our galaxy. Scientists had previously seen stars orbiting around something invisible, compact, and very massive at the centre of the Milky Way. This strongly suggested that this object — known as Sagittarius A* (Sgr A*, pronounced "sadge-ay-star") — is a black hole, and today’s image provides the first direct visual evidence of it.

Although we cannot see the black hole itself, because it is completely dark, glowing gas around it reveals a telltale signature: a dark central region (called a “shadow”) surrounded by a bright ring-like structure. The new view captures light bent by the powerful gravity of the black hole, which is four million times more massive than our Sun.

“We were stunned by how well the size of the ring agreed with predictions from Einstein’s Theory of General Relativity," said EHT Project Scientist Geoffrey Bower from the Institute of Astronomy and Astrophysics, Academia Sinica, Taipei. "These unprecedented observations have greatly improved our understanding of what happens at the very centre of our galaxy, and offer new insights on how these giant black holes interact with their surroundings.” The EHT team's results are being published today in a special issue of The Astrophysical Journal Letters. [Link]

Because the black hole is about 27,000 light-years away from Earth, it appears to us to have about the same size in the sky as a donut on the Moon. To image it, the team created the powerful EHT, which linked together eight existing radio observatories across the planet to form a single “Earth-sized” virtual telescope [1]. The EHT observed Sgr A* on multiple nights, collecting data for many hours in a row, similar to using a long exposure time on a camera.

One of these radio observatories is the Large Millimeter Telescope Alfonso Serrano (LMT), located in the state of Puebla, Mexico. “The participation of the LMT in the EHT is important, in part because the LMT is the largest single-dish radio telescope in the world, and it is designed and optimized to observe in a wavelength of 1 millimeter”, said David H. Hughes, LMT director and researcher at Mexico’s Instituto Nacional de Astrofísica, Óptica y Electrónica (INAOE), one of CONACyT’s Public Research Centers. “LMT’s location within Mexico, in the central region of the worldwide network of radio telescopes that form the EHT, also allows it to contribute important data to improve the quality of the final image of the supermassive black hole in the center of our galaxy”, he continued.

This new breakthrough result follows the EHT collaboration’s 2019 release of the first image of a black hole, called M87*, at the centre of the more distant Messier 87 galaxy.

The two black holes look remarkably similar, even though our galaxy’s black hole is more than a thousand times smaller and less massive than M87* [2]. "We have two completely different types of galaxies and two very different black hole masses, but close to the edge of these black holes they look amazingly similar,” says Sera Markoff, Co-Chair of the EHT Science Council and a professor of theoretical astrophysics at the University of Amsterdam, the Netherlands. "This tells us that General Relativity governs these objects up close, and any differences we see further away must be due to differences in the material that surrounds the black holes.”

This result is also specially important because “contrary to the black hole M87*, Sgr A* has an extremely well-determined mass and its distance is known with great precision. This allows to confront the results obtained with the EHT with theoretical predictions in greater detail. The final image is in agreement with Einstein’s Theory for rotating black holes”, said Laurent Loinard, researcher at Mexico’s Instituto de Radioastronomía y Astrofísica (IRyA), Universidad Nacional Autónoma de México (UNAM).

This achievement was considerably more difficult than for M87*, even though Sgr A* is much closer to us. EHT scientist Chi-kwan (‘CK’) Chan, from Steward Observatory and Department of Astronomy and the Data Science Institute of the University of Arizona, US, explains: “The gas in the vicinity of the black holes moves at the same speed — nearly as fast as light — around both Sgr A* and M87*. But where gas takes days to weeks to orbit the larger M87*, in the much smaller Sgr A* it completes an orbit in mere minutes. This means the brightness and pattern of the gas around Sgr A* was changing rapidly as the EHT Collaboration was observing it — a bit like trying to take a clear picture of a puppy quickly chasing its tail.”

The researchers had to develop sophisticated new tools that accounted for the gas movement around Sgr A*. While M87* was an easier, steadier target, with nearly all images looking the same, that was not the case for Sgr A*. The image of the Sgr A* black hole is an average of the different images the team extracted, finally revealing the giant lurking at the centre of our galaxy for the first time.

The effort was made possible through the ingenuity of more than 300 researchers from 80 institutes around the world that together make up the EHT Collaboration. In addition to developing complex tools to overcome the challenges of imaging Sgr A*, the team worked rigorously for five years, using supercomputers to combine and analyse their data, all while compiling an unprecedented library of simulated black holes to compare with the observations.

In Mexico, “researchers, particularly young scientists, have played a fundamental role in the collection, processing and analysis of the observations of our Galactic center”, emphasized Laurent Loinard. “Their contribution spans data calibration, reconstruction of images and their theoretical interpretation, particularly regarding constraints to possible deviations of Einstein’s General Theory of Relativity”.

“The 2017 observations allowed us to consolidate a binational group between Mexico and the United States including researchers and technicians with specific skills to install, test and configure all necessary devices to incorporate the LMT into the EHT array”, indicated David Sánchez Argüelles, researcher at CONACyT and co-leader of the EHT observations group at LMT.

Scientists are particularly excited to finally have images of two black holes of very different sizes, which offers the opportunity to understand how they compare and contrast. They have also begun to use the new data to test theories and models of how gas behaves around supermassive black holes. This process is not yet fully understood but is thought to play a key role in shaping the formation and evolution of galaxies.

“Now we can study the differences between these two supermassive black holes to gain valuable new clues about how this important process works,” said EHT scientist Keiichi Asada from the Institute of Astronomy and Astrophysics, Academia Sinica, Taipei. “We have images for two black holes — one at the large end and one at the small end of supermassive black holes in the Universe — so we can go a lot further in testing how gravity behaves in these extreme environments than ever before.”

This result has been significant not only because of its scientific relevance but also because of what it means for the academic communities of the participating countries. “For Mexico, its is very important to remain in the EHT collaboration, because it gives world visibility to Mexican science and the LMT”, said Gisela Ortiz-León, postdoctoral researcher at Instituto de Astronomía, UNAM. “It also allows us, Mexican students and young researchers, to work within a stimulating collaboration, which includes some of the best scientists in the world.”

Progress on the EHT continues: a major observation campaign in March 2022 included more telescopes than ever before. The ongoing expansion of the EHT network and significant technological upgrades will allow scientists to share even more impressive images as well as movies of black holes in the near future.

“Currently, our binational group has continued developing new instruments and techniques that will allow the LMT to have an even more relevant role in future observations of the EHT”, pointed out David Sánchez Argüelles. “It is exciting to think about the new and unique understanding that EHT gives us about supermassive black holes and their symbiotic relation with galaxies”, concluded David H. Hughes.

Dr. David H. Hughe
LMT Director and researcher at INAOE
Contact with Guadalupe Rivera Loy
Phone: 222 184 1664
email: This email address is being protected from spambots. You need JavaScript enabled to view it.

Dr. Laurent Loinard
Researcher at IRyA, UNAM
Contact with  René A. Ortega Minakata
Phone: 3321154638
email: This email address is being protected from spambots. You need JavaScript enabled to view it. 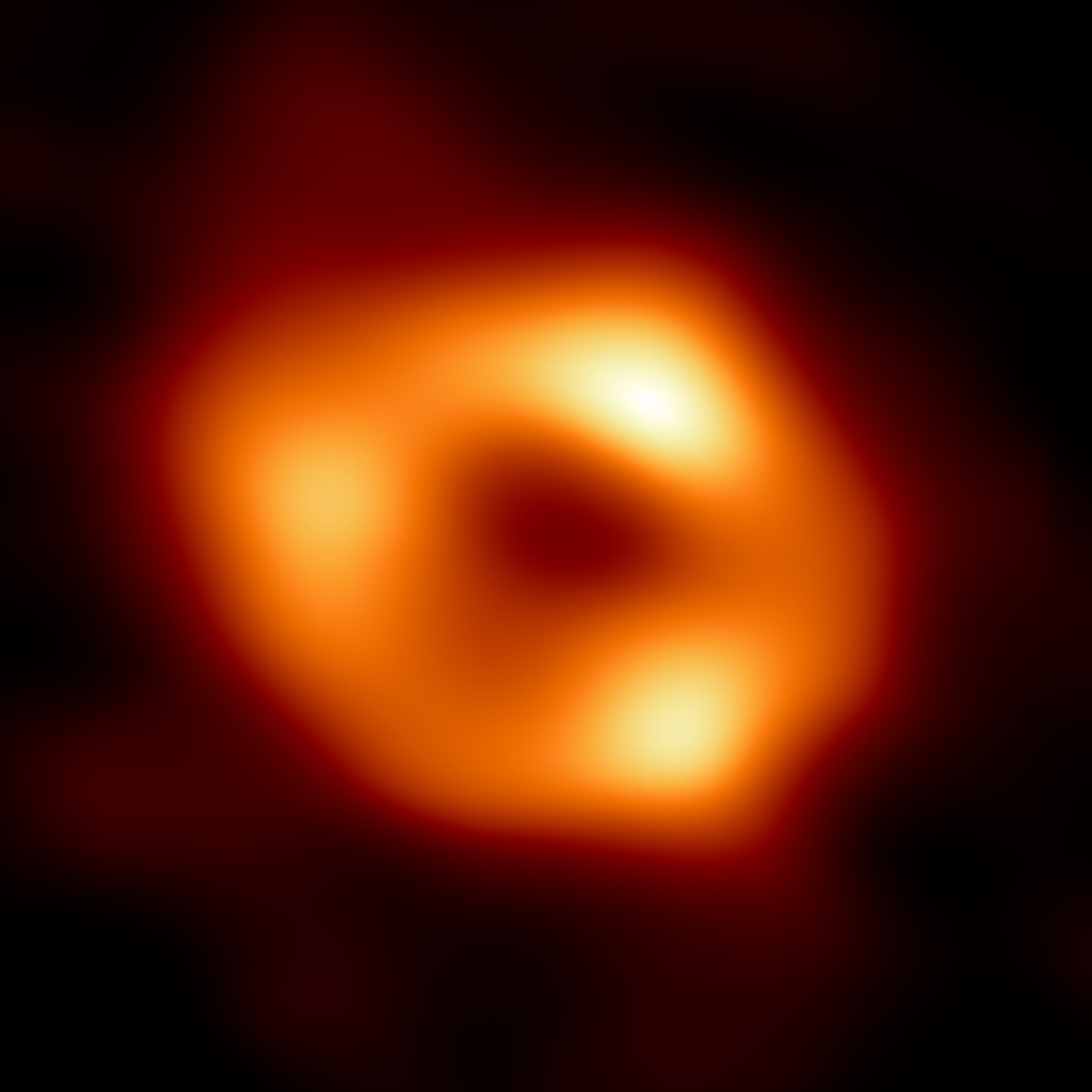 This is the first image of Sagittarius A* (or Sgr A* for short), the supermassive black hole at the centre of our galaxy. It’s the first direct visual evidence of the presence of this black hole. It was captured by the Event Horizon Telescope (EHT), an array which linked together eight existing radio observatories across the planet to form a single “Earth-sized” virtual telescope. The telescope is named after the “event horizon”, the boundary of the black hole beyond which no light can escape.

Although we cannot see the event horizon itself, because it cannot emit light, glowing gas orbiting around the black hole reveals a telltale signature: a dark central region (called a “shadow”) surrounded by a bright ring-like structure. The new view captures light bent by the powerful gravity of the black hole, which is four million times more massive than our Sun. The image of the Sgr A* black hole is an average of the different images the EHT Collaboration has extracted from its 2017 observations. 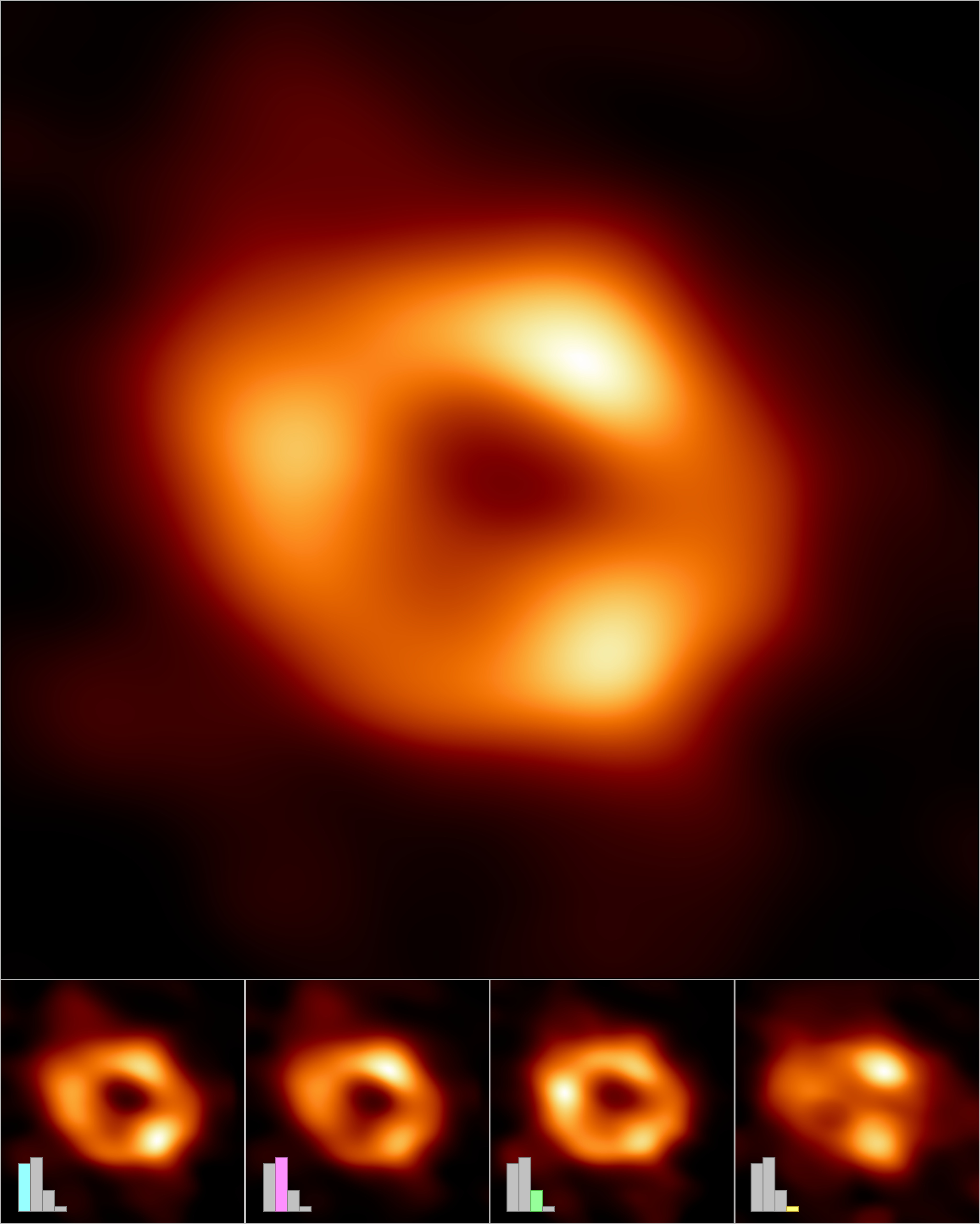 The Event Horizon Telescope (EHT) Collaboration has created a single image (top frame) of the supermassive black hole at the centre of our galaxy, called Sagittarius A* (or Sgr A* for short), by combining images extracted from the EHT observations.

The main image was produced by averaging together thousands of images created using different computational methods — all of which accurately fit the EHT data. This averaged image retains features more commonly seen in the varied images, and suppresses features that appear infrequently.

The images can also be clustered into four groups based on similar features. An averaged, representative image for each of the four clusters is shown in the bottom row. Three of the clusters show a ring structure but, with differently distributed brightness around the ring. The fourth cluster contains images that also fit the data but do not appear ring-like.

The bar graphs show the relative number of images belonging to each cluster. Thousands of images fell into each of the first three clusters, while the fourth and smallest cluster contains only hundreds of images. The heights of the bars indicate the relative "weights," or contributions, of each cluster to the averaged image at top.

Download more graphics, animations and videos about these results here.
Download background information on the EHT, pictures and bios of Mexican researchers or resaerchers in Mexico that contributed to these results, and LMT photos and videos here.