A planet is being torn apart by its own star

An international team of astronomers studied the X-ray light coming from a white dwarf star and found that it has a very close companion object, probably a planet, that is being torn apart by the interaction with its star. 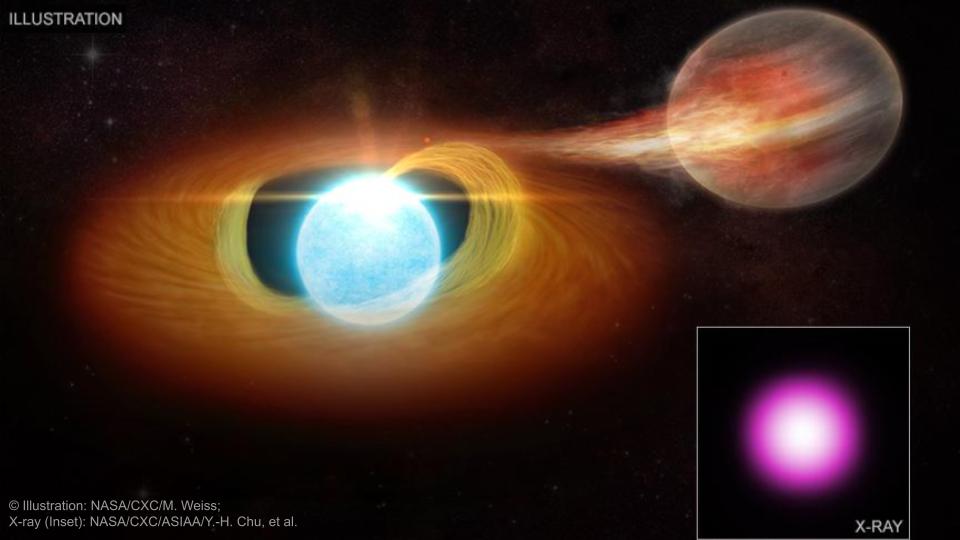 "This companion object is only just some 560,000 miles (900,000 km) away from the white dwarf, about 65 times closer than the mean distance from Mercury to the Sun," said Dr. Jesús Toala from the Institute of Radio Astronomy and Astrophysics, National Autonomous University of Mexico (IRyA, UNAM), who co-authored this study. "This object is being blasted with heat."

A star similar to the Sun turns hydrogen into helium in its center, producing light and keeping it stable. Afterwards it starts converting helium into heavier elements such as carbon, that accumulate in its core. When enough carbon has been amassed, its outer layers expand and cool until they are lost to the interstellar space, leaving the carbon nucleus uncovered.

This now exposed core is what is called a white dwarf. It emits X-ray light because its surface temperature is initially very high. However, researchers in this study observed three white dwarfs with high-energy X-ray emission that cannot be explained solely by the temperature of the star.

The team observed one of these stars, called KPD 0005+5106, for about 13 hours, finding that the high-energy X-Ray emission brightened and dimmed periodically every 4.7 h, a sign that the star has a companion object. This happens because the white dwarf “steals” material from its companion, slowly tearing it apart. This material falls onto the star, producing a hot spot on its surface that emits high-energy X-rays. Each time the companion revolves around the star, we see the high-energy X-rays brighten.

"We did not know this white dwarf had a companion before we saw the X-ray data," said Prof. You-Hua Chu of the Institute of Astronomy and Astrophysics, Academia Sinica (ASIAA) in Taiwan, who led the study. "We have looked for the companion with optical light telescopes but have not seen anything, which means it is a small and very dim star, a brown dwarf (a ‘failed star’), or a giant planet."

The astronomers studied which of these three types of objects could be the companion and found that all three may be able to donate their material to their star if they are sufficiently close to it. The most probable candidate turned out to be the giant planet.
The huge amount of radiation and intense gravity to which this probable planet is subjected to, coupled with the transfer of mass to its parent star, will end up tearing it apart completely, in a slow death process that will last a few hundred million years.

The other two white dwarfs studied by the team did not have known companions either, but since they were also found to emit high-energy X-rays like KPD 0005+5106, they might have very small, close companions, too.

A recent study, led by Joshua Blackman from the University of Tasmania in Australia and published in Nature, found a Jupiter-like planet around a white dwarf observed with infrared light, showing that a planet can survive the stellar evolution process that produces white dwarfs. However, the distance from this planet to its star is almost 500 times larger than the distance that separates KPD 0005+5106 from its companion.

“We need more theoretical models of the evolution of stars with companion objects to understand how this planet, or maybe very low-mass star, ended up so close to its white dwarf”, concluded Dr. Jesús Toalá.

Dr. Jesús Toalá obtained his Bachelor in Physics degree from the Autonomous University of Sinaloa, Mexico, and his PhD in astrophysics at the Instituto de Astrofísica de Andalucía (IAA-CSIC) in Granada, Spain. He was a postdoctoral researcher at the IAA-CSIC and at the
Institute of Astronomy & Astrophysics, Academia Sinica (ASIAA) in Taiwan. He has been a researcher at IRyA UNAM, Mexico since June 2017.

He studies the circumstellar medium around low and high-mass stars through infrared, optical and X-ray observations. He also studies the X-ray emission from superbubbles in the Large Magellanic Cloud.

Dr. Toalá organizes the meetings of the Evolved Stars working group at IRyA, and is a member of the editorial board of the UNAM Campus Morelia Bulletin.

This research article was published on April 5, 2021 in The Astrophysical Journal.

The Instituto de Radioastronomía y Astrofísica (IRyA), or Institute for Radioastronomy and Astrophysics is an academic unit at UNAM, Campus Morelia, Mexico. We perform high-level and high-impact research in the areas of interstellar medium, star formation, evolved stars, high energy astrophysics, Galactic dynamics and structure, extragalactic astronomy and cosmology. We contribute to the education of high-level human resources through a postgraduate program, and we have close contact with society through diverse outreach programs.
If you are interested in our Institute, visit the English version of our webpage, www.irya.unam.mx/web/en www.irya.unam.mx/web/en

Text: IRyA UNAM, based on the note published by the Chandra Observatory press room.
https://chandra.si.edu/press/21_releases/press_112221.html