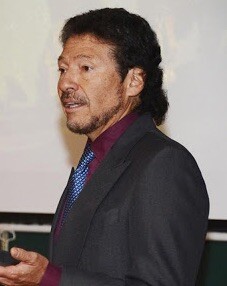 
Dr. Enrique Vázquez-Semadeni obtained his undergraduate degree in physics from the Science Faculty of the National Autonomous University of Mexico and his doctorate in astronomy from the University of Texas at Austin.

He has made important contributions in the field of Galactic star formation and its relationship to compressible magnetohydrodynamic turbulence in the interstellar medium. He is an expert in the thermodynamics of the interstellar medium and its interaction with supersonic turbulence. He discovered the functional form of the probability distribution of the density field in isothermal compressible turbulence, on which various analytical theories of star formation have since been based. He has studied the life cycle of molecular clouds, from their formation and growth up to the time when they form stars and are finally destroyed by stellar feedback energy, and how this process controls the speed of star formation in galaxies. He is one of the main proponents of a new paradigm for the structure, dynamics and evolution of molecular clouds in which, far from being close to equilibrium, the clouds are in the process of global and hierarchical gravitational collapse.