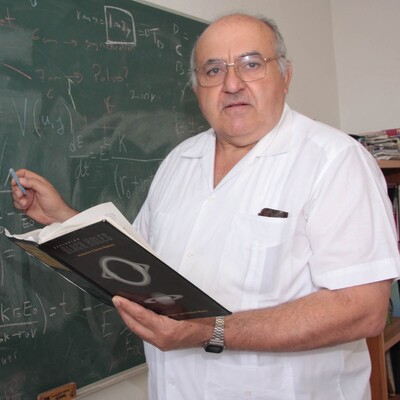 
Dr. Luis Felipe Rodríguez obtained his bachelor’s degree in physics from the Science Faculty of the National Autonomous University of Mexico, and his PhD in aastronomy from the University of Harvard. He is recognised as the instigator of radioastronomy in Mexico.

His research is focussed mainly on the birth and early stages of stars, and he also studies Galactic X-ray sources. Among his contributions, the discovery of bipolar outflows from young stars, the elucidation of the driving mechanism of Herbig-Haro objects, and the detection of protoplanetary disks around young stars, are some of the highlights. This work provides the observational evidence needed to support the idea that young stars are formed surrounded by protoplanetary disks of gas and dust, from which planets will condense, just as must have occurred in our Solar System.

Dr. Rodríguez has received many awards, including the Robert J. Trumpler Prize from the Astronomical Society of the Pacific, the Bruno Rossi Prize from the American Astronomical Society, the Physics Prize from The World Academy of Science (TWAS) and, in Mexico, the Premio a la Investigación Científica given by the Mexican Physics Society, the Premio Nacional de Ciencias y Artes awarded by the government of Mexico, and the Premio Universidad Nacional given by the UNAM. He was also elected Foreign Member of the National Academy of Sciences of the USA.

In 2010 he was made Emeritus Researcher and became Doctor Honoris Causa of the National Autonomous University of Mexico for his distinguished scientific career. Dr. Luis Felipe Rodríguez was elected member of El Colegio Nacional of Mexico in February 2000.